I have struggled to understand the concepts of VMware NSX major functionality like NSX Edge Services Gateway, Edge Distributed Logical Router and their options, hence I am writing this series to explain in detail what I have learnt in the past few days regarding these functions in layman terms and not the marketing jargon I see on the internet regarding VMware NSX.

Here is how I did it,

I have an L2 physical network switch for my home lab, so I am sure I can’t do L3 routing, in this instance I am going to show you how to create an Edge Services gateway with the proper interfaces to have multiple subnets communicating between them on a VM connected to one of these logical switches.

First, we deploy an Edge services gateway using the default options and the interfaces as shown below:

Here are the interfaces which I have configured on the gateway

Also, I configured the Default gateway in the Edge Services Gateway configuration while deploying as shown:

Now, that we have configured the L2 logical networks on the Edge Services Gateway with the interfaces, let us go to the VMs and see how the communication goes on through the logical networks 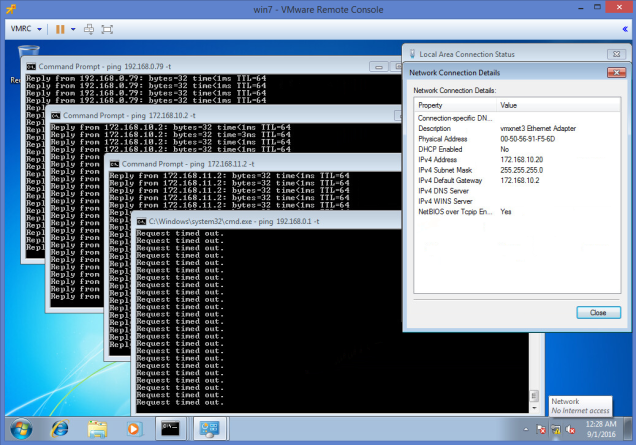 Also, note that we weren’t able to ping my default gateway 192.168.0.1 since there is no interface or routing to 192.168.0.1 in the edge services gateway. We will cover this under routing and NSX Distributed Logical Router part next.

By this, I am concluding this part as I wanted to show you how logical networks can be used with VMS and how their networks can route between the different subnets using Edge services gateway. This is for the East-West traffic between VMS.